FOLLOW ALONG ON INSTAGARM
So finally here is the long requested recipe for my ”skinny” cinnamon buns. Sorry, for the delay, but the past few days have been quite stressful and other projects had to be finished first. Don’t we all love cinnamon rolls or cinnamon buns?! Normally they come with a lot of sugar and as real sugar bombs. So for my “the18thdistrict fitfam”  I’ve tried to make a healthier version. Let’s start by making a super easy, yeast free (isn’t this amazing) dough by mixing glutenfree flour, salt, and baking powder with applesauce. If low fat isn’t your groove, you can totally use butter or a vegan substitute. You can even use grapeseed oil or coconut oil, it’s your choice!  After adding the liquid, knead the dough a few times in the bowl until it comes together, and turn it out on a lightly floured surface.
INSTRUCTIONS 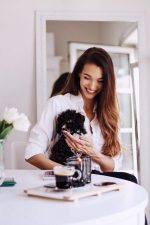 My name is Quirina-Felizitas.
I’m the blogger behind the18thdistrict.
A girl with passion for Fashion, Triathlon, Design, Food and Photography.
Welcome to my blog!
♡ ♡ ♡
Quirina-Felizitas

END_OF_DOCUMENT_TOKEN_TO_BE_REPLACED
By continuing to browse the site you are agreeing to our use of cookies.
×